The Scottish Government’s restrictions on outdoor activity in response to the Covid-19 pandemic have of course brought most work on the railway to a halt. We feared that this might prohibit the obligatory pre TAWS application European Protected Species re-surveys. However, shortly before the First Minister’s statement of 21st May was released we were informed that it would still be feasible for these surveys to proceed without breaching lockdown rules. There is therefore still a chance that we will be able to stick to the aim of getting the TAWS application submitted this year. Watch this space for further updates

One of the most iconic images of the British Railways era is the “flying sausage” or “hot dog” totem format used for station name signs. There would usually be one on every lamp post on a station platform. When lines and stations were closed many were rescued and are now highly prized (and highly priced) collector’s items.

Early this year, one such sign from Grantown West station came up for auction and was bought for a four figure sum by a supporter of the extension and donated to the Trust in the hope (expectation, please!) that it will eventually be erected at the railway’s new terminus station at Grantown. The donor wants to remain anonymous but we want to thank them for their generous gesture.

Towards the end of 2019, Highland Council Convener Bill Lobban suggested that we raise the project’s profile by erecting some signage in the vicinity of Grantown. After kicking around a few design ideas the Trustees settled on a silhouette of one of the railway’s mainstay locomotives (Ivatt Class 2 No. 46512) on the bridge north of the A95 at Gaich. Just in case anyone seeing the sign couldn’t figure out the message, our website address was added. (See image).

Not so much flags in the ground as survey stations in the ground. Over 2 days in December, Ian Stokes has undertaken a detailed topographic survey of the proposed terminus site between Strathspey Drive and the caravan park. The results will support not only the completion of the TAWS application plans and cross sections but also dialogue with CNPA and SEPA in relation to their TAWS pre application comments. Image at bottom right shows Ian with his surveying kit.

As part of our “flags in the ground” project – where we want to show by work on the ground that we mean to get to Grantown – we commissioned replacement of boundary fencing between Craggan and Gaich. Existing fencing was either in very poor condition (west side of the line) or had disappeared altogether (east side). The work was carried out by Dores-based fencing contractor Mike Gibson and is of a superb standard. It demonstrates not only our commitment to getting to Grantown but our aim to be good neighbours with the farming community..
That fencing was long planned; we had originally contacted Mike a year ago. More opportunistically, Scottish Woodlands, who use the railway’s facilities for the staff training and equipment certification needed to let them do work for Network Rail, agreed to fell a couple of trees at Glenbeg as a quid pro quo (Latin for “no charge”, we believe….) and undertook the work on 6th and 7th November. One of these trees was a threat to the structural integrity of the Glenbeg bridge and was beyond the capabilities of our chainsaw-trained volunteers, so many thanks to all at Scottish Woodlands for this contribution to the extension.
Images of both operations on the right and on the homepage.

Environmental resurveys are now almost complete. Unfortunately the need to survey hibernating bats over the winter means that the timeframe for submission of the TAWS application has slipped to Spring 2021

With the former station platforms and buildings covered by a Council-owned industrial estate and roads depot, land on the edge of the depot and behind the industrial estate has been the key to getting the railway returned to Grantown. Successive Councils have committed to make this land available for the extension when needed, for a nominal price of £1. The deal was finally settled on 20th November 2020 when Council Convener Bill Lobban exchanged the deeds to the land for a £1 coin which Trustee Basil Dunlop has been saving for the occasion (pictured).

This is a crucial acquisition both for the TAWS application (in which the Trust has to show that it has or will have available all the land needed for the project) and for construction of the railway as its industrial estate location gives ideal access for delivery of materials by road. It is also likely to be the locus of further pre TAWS Order “flags in the ground” activities such as devegetation and materials storage. 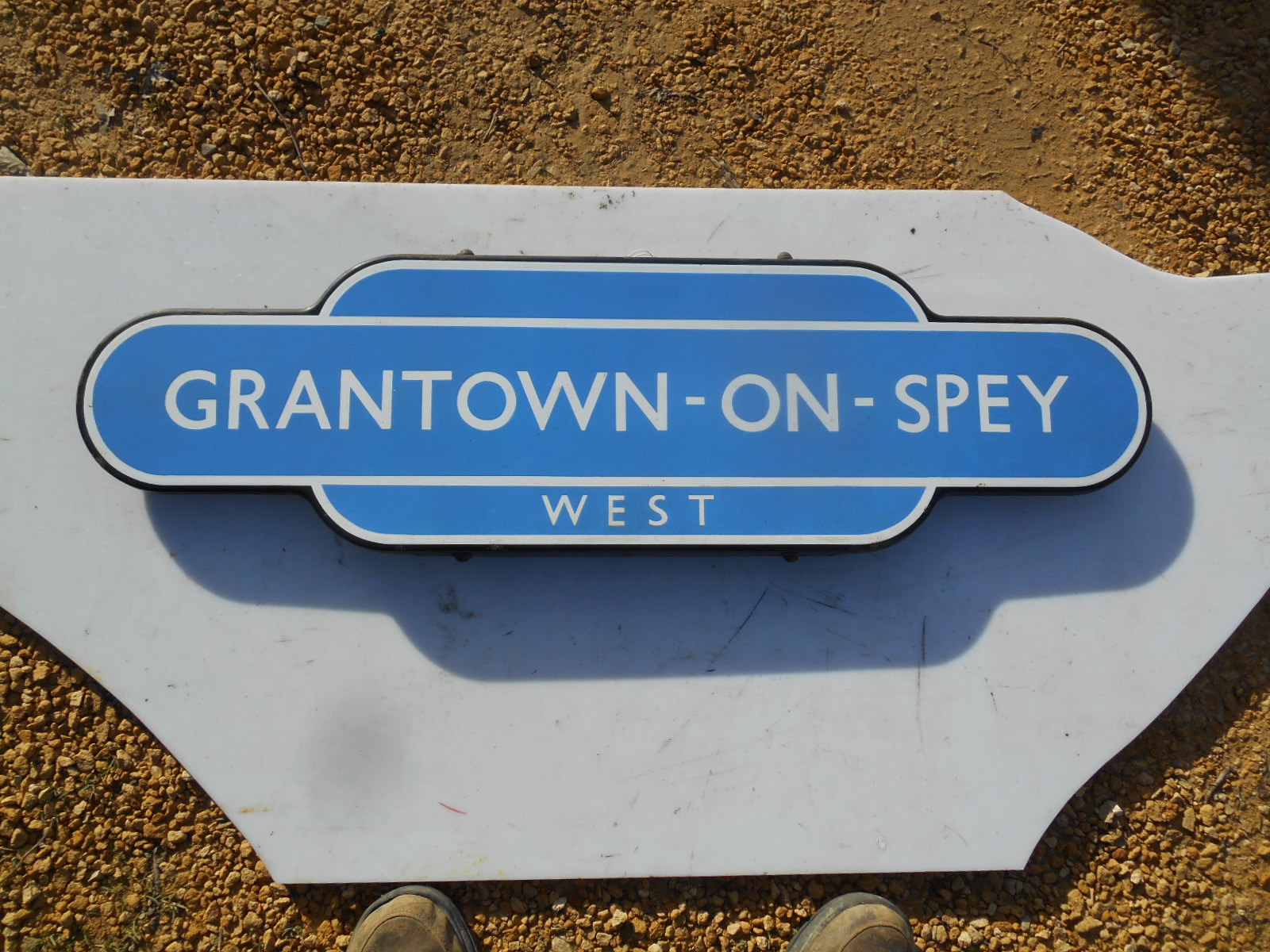 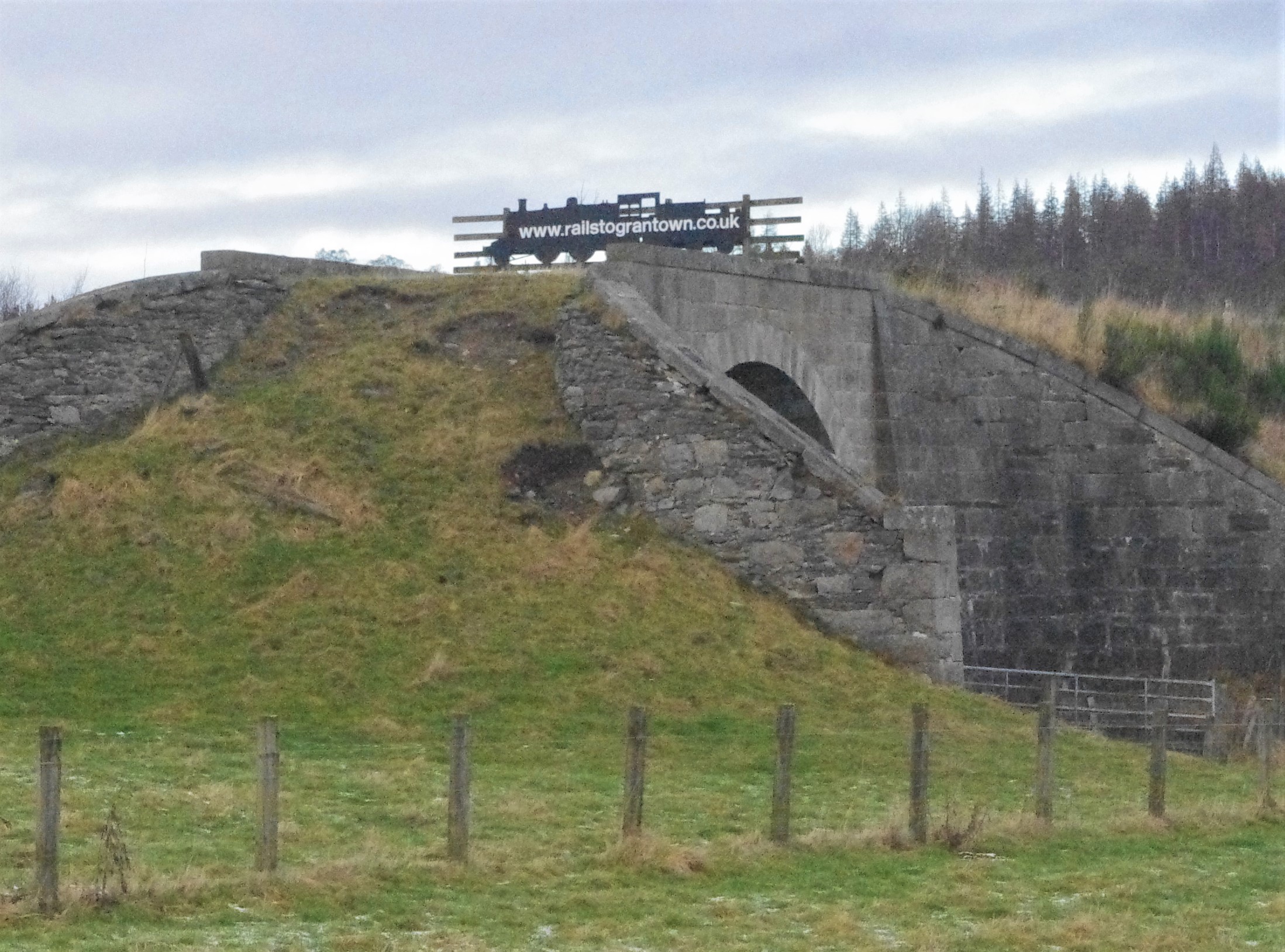 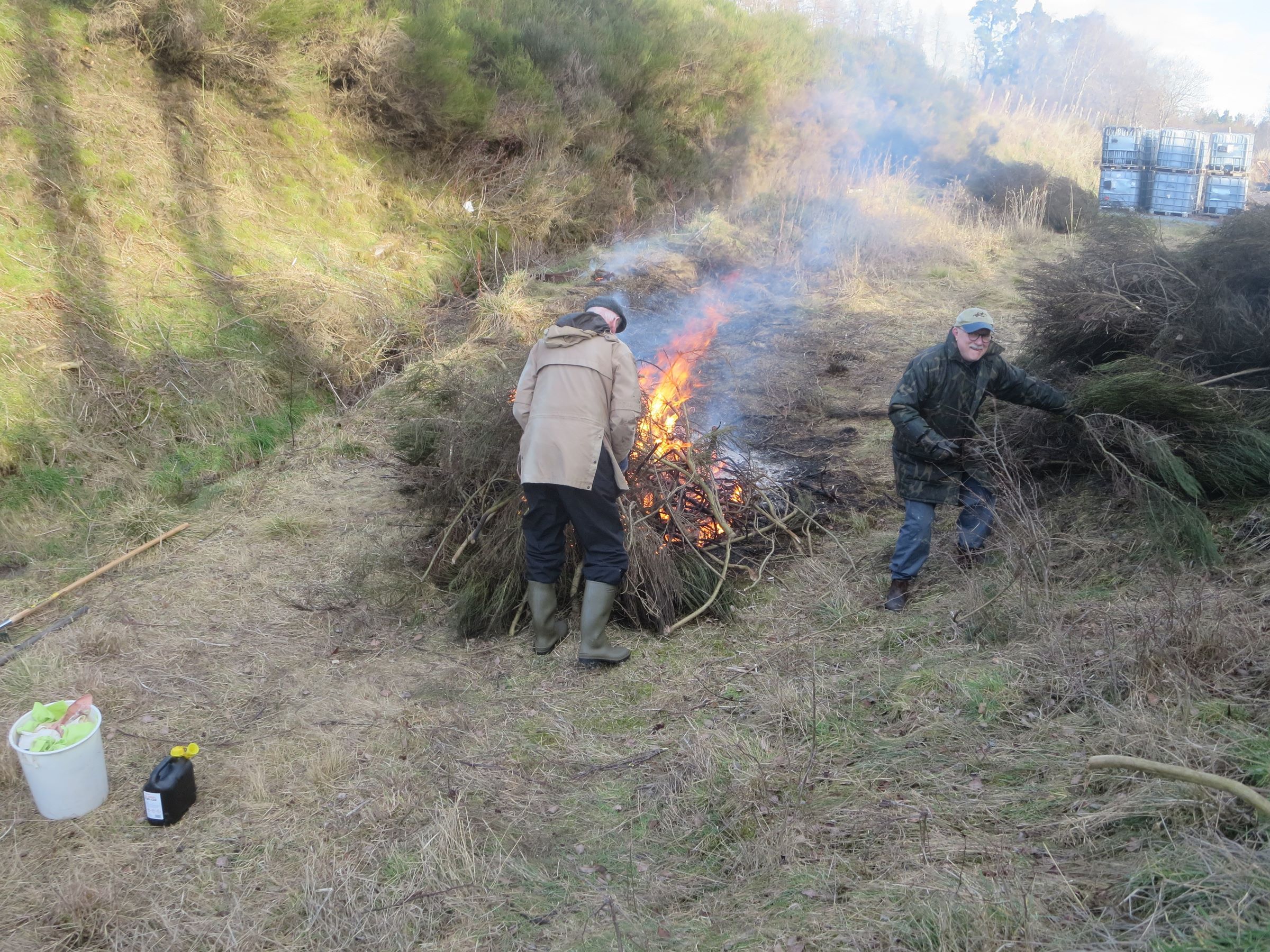 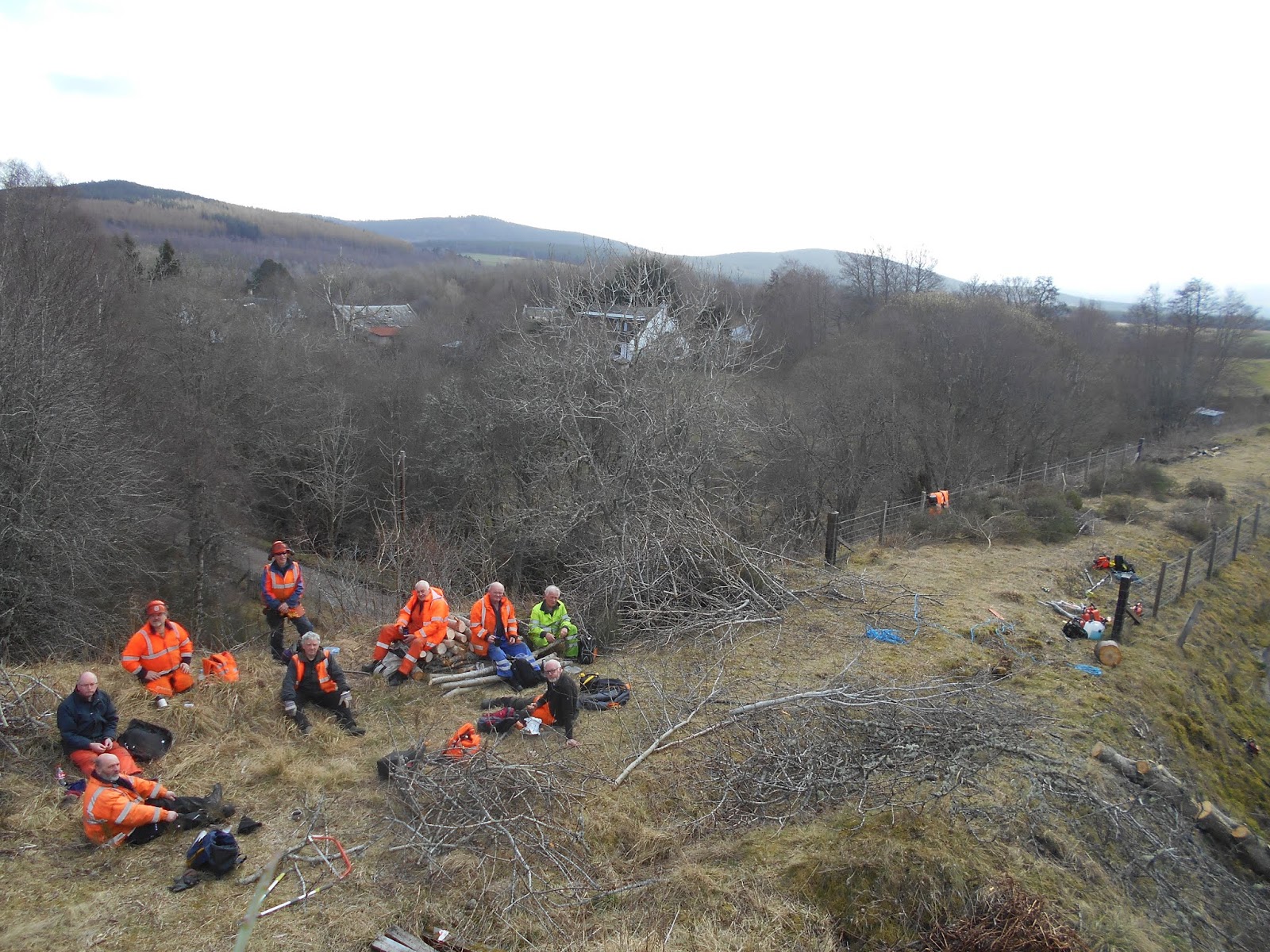 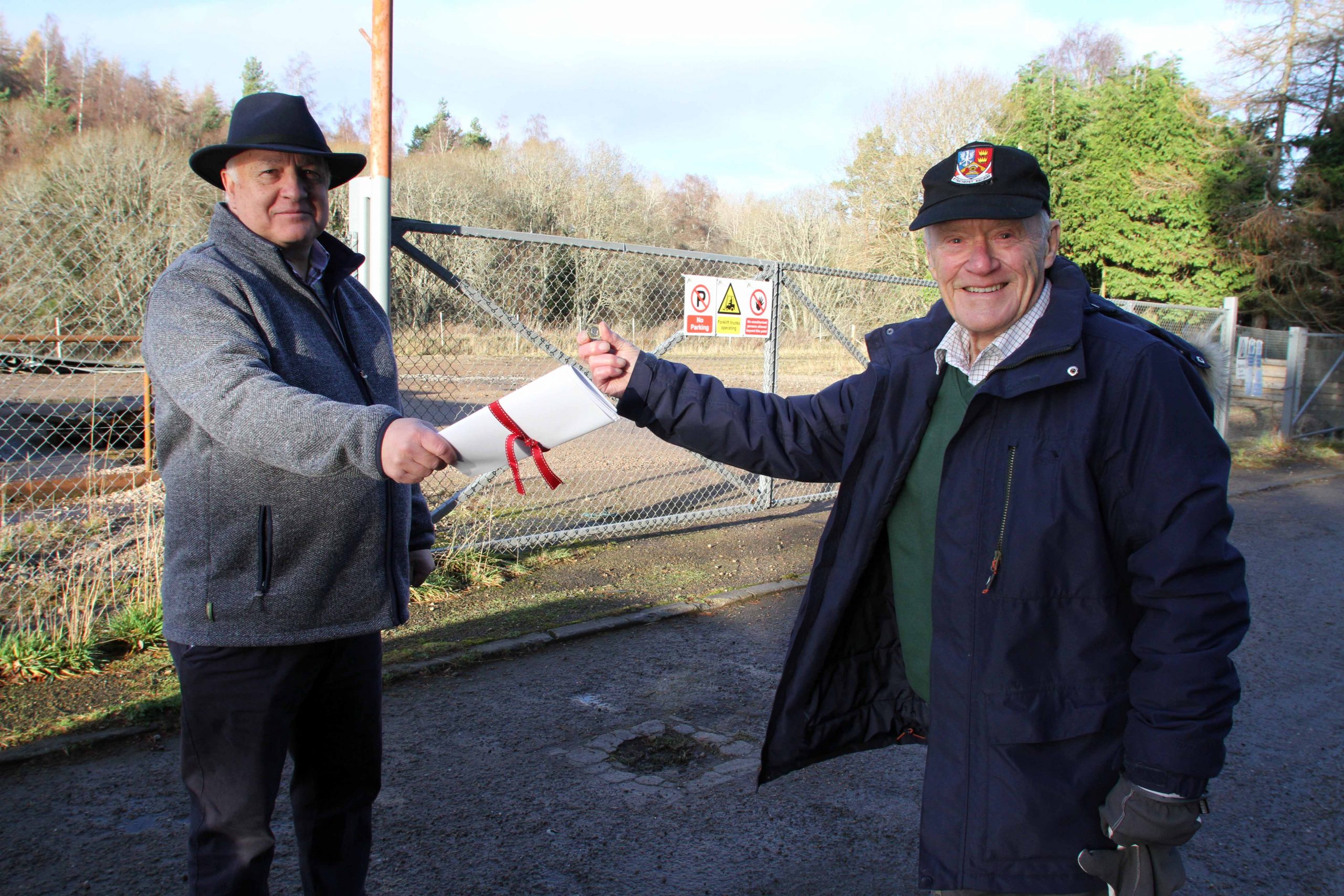 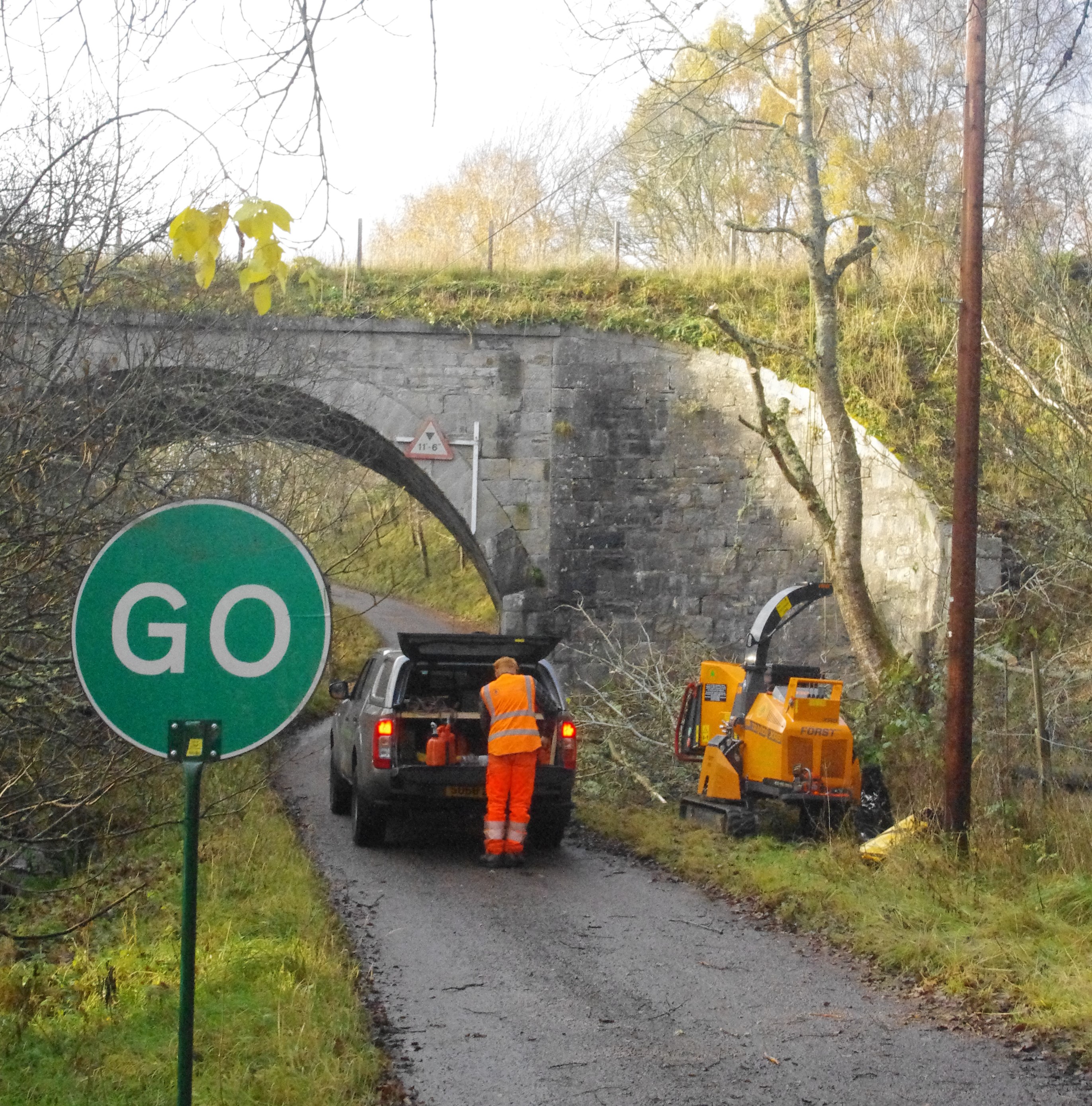 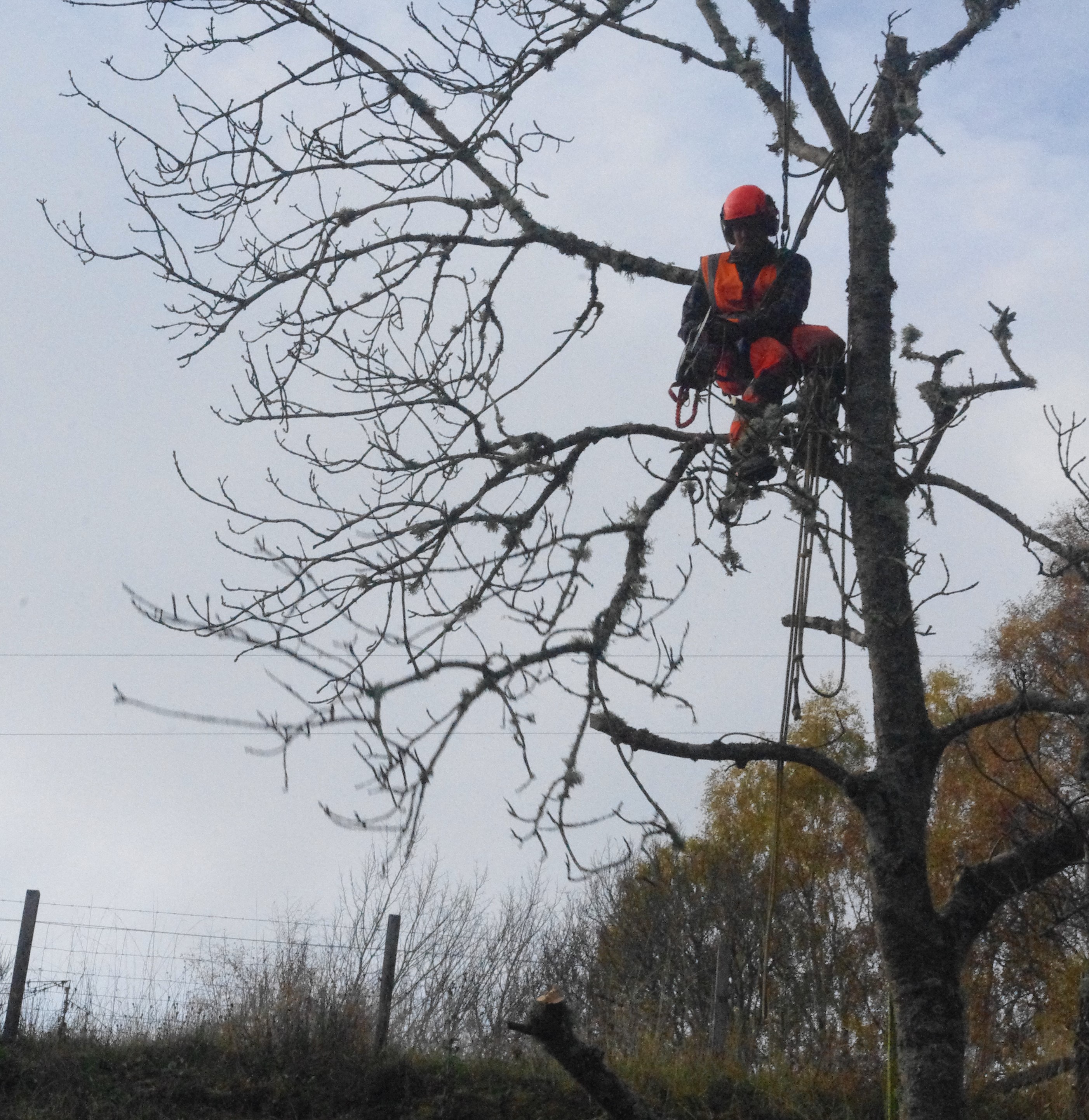 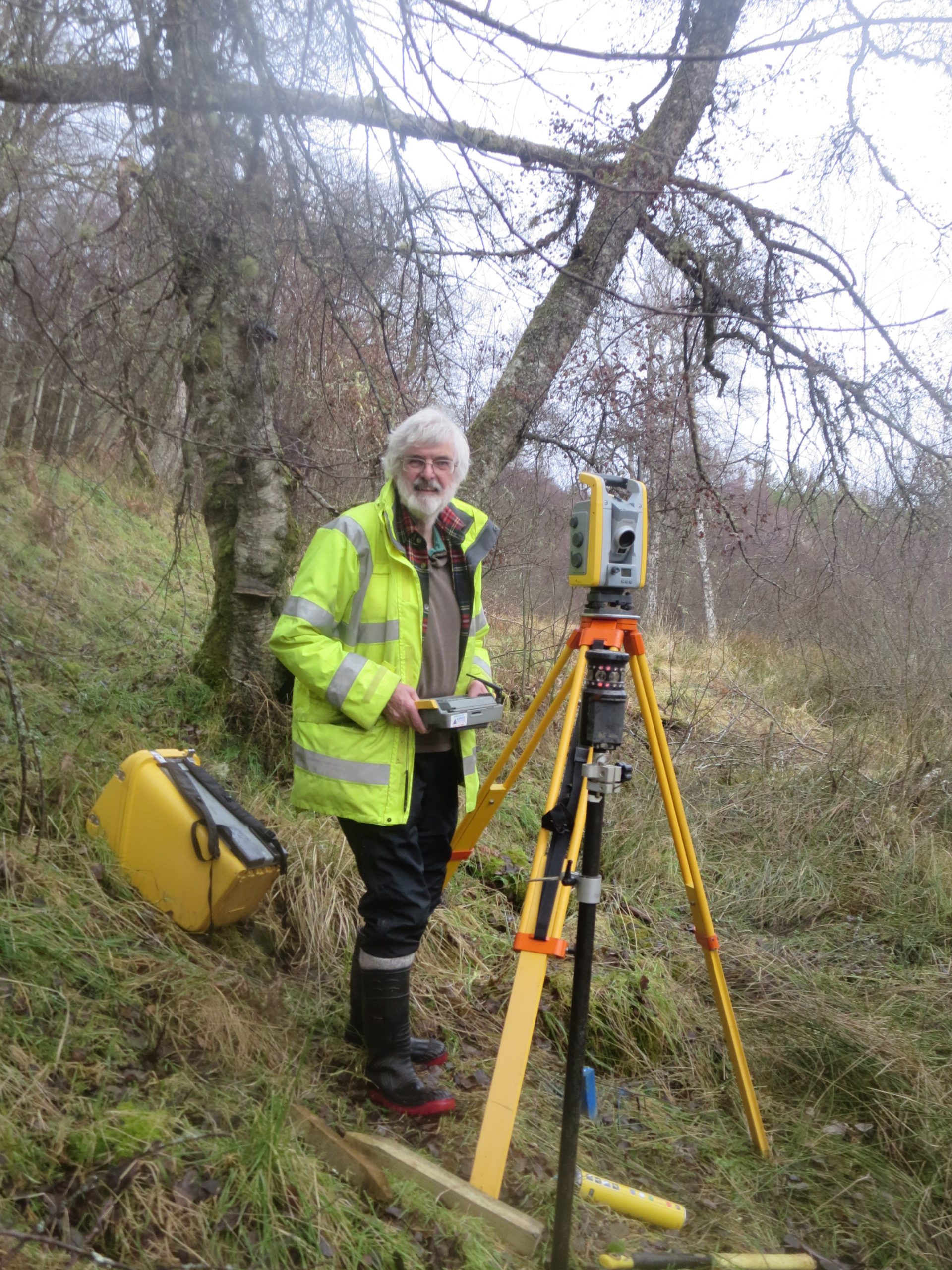